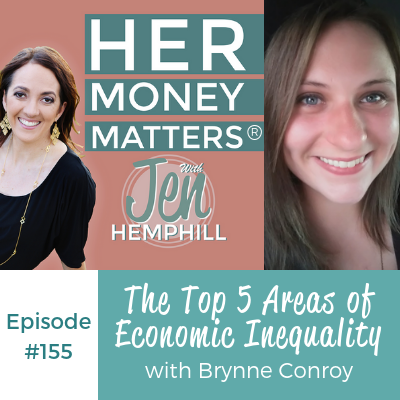 In this episode we go deep into a topic we haven’t really discussed on this podcast and that is the topic of economic inequality. Thankfully, we have the fabulous Brynne Conroy joining us today as she wrote a book on this matter!

Brynne grew up in a middle class household. Her family struggled with debt, but she only learnt about it later in life. Her parents excelled at teaching her about finances, such as car insurance, comparison shopping, and the value of work. When she was around 16 years old, Brynne moved from home and began providing for herself. She did not have much to support herself and she spent the first 10 years of her life in poverty and working through it. This experience gave her a new perspective. Brynne’s parents’ teachings gave her hope, and she progressively worked her way up.

Some Background On Brynne’s New Book

Brynne wanted to focus on the intersectionality of feminism. She wanted other women to talk about their experiences and how they impact the bigger picture.

In her personal life, Brynne was raised in a conservative household. Living in poverty made her realize the small portion of what other people were going through, what was missing from  her world view. She was starting that shift when she began writing. What she found was missing from most financial literature was the greater social issues that affect people’s personal economies. Brynn then made her goal to acknowledge those issues, show their impact, and provide some means to improve them.

Who Should Pick up the Feminist Financial Handbook?

Ultimately, Brynne wants people to walk away with hope; the same hope that kept her moving forward during her years of poverty. Brynne wants everyone to acknowledgment that money isn’t everything: “Money isn’t the key to happiness, but poverty will rain on your parade.”

Terms and Their Relation to Points in the Feminist Financial Handbook

Intersectional feminism: Being oppressed not because of your sex, but by other non gender related pressures.

Hierarchy: Looking at the hierarchical system rather than just the patriarchy. Addressing the existence of intersectionality in oppression; men are not the only ones keeping women down. Things such as growing up economically disadvantaged, or having a disability, play a part in oppression.

Heteronormativity and Cisnormativity: Both involved within the LGBT community. The book mentions how oppression is imposed consciously and unconsciously on these communities

Disablism: That mindset that disabled people cannot do anything. Manifests as people trying to establish their own validity by helping the disabled speak out. In reality, they are not helping, but oppressing the disabled by hindering their chances to contribute to the world themselves.

Can We Have it All?

As women, we are expected to do it all. We are coming out of the period where we were domestic, and our only job was taking care of children. Women are still expected to have these responsibilities, yet most households require a dual income. This puts a pressure to do and be everything, which we beat ourselves up about.

Brynne believes it is not possible to have a life-work balance. What she does believe is flow: to go with what’s going well. You cannot go full force with everything; burnout would be inevitable. If it’s a high-sale week but the house is a mess, that is ok. Focus on the sales, and the house can be cleaned after. Re-evaluate every once in awhile, and allow your priorities to change.

It is nice to think that everyone will get along and everything thing will be the way it is now. It is custom to prepare for everything financially (like getting insurance), yet no one thinks to prepare for the possibility of divorce. In the US, about 50% of women will see their 20th wedding anniversary, while the likelihood of a woman dying before 60 is 4.8%. There is a taboo around a woman having her money: she does not trust her partner. In reality, allowing both partners in a marriage have their own spending accounts gives them each their own independence.

When you are separating your finances, it should be done openly. Separate spending accounts is very healthy. It is more respectful and trusting to let your partner have their own independence. This way, if something bad happens, they are safe to support themselves. It acknowledges that you are an individual.

Women are diagnosed with depression and anxiety twice as often as men. Brynne believes this is due to the societal changes women faced from the way they are socialized. WOmen are also more readily diagnosed with Bipolar disorder and PTSD, which also affect the ability to do day to day things. A woman might forget to pay bills, or not make necessary financial changes due to these disorders. Mental disorders might inhibit someones from getting a regular job, which affects their ability to have an adequate income. Mental health has a very real impact on finances.

The post, The Top 5 Areas of Economic Inequality with Brynne Conroy |HMM 155 appeared first on the Her Money Matters Podcast. 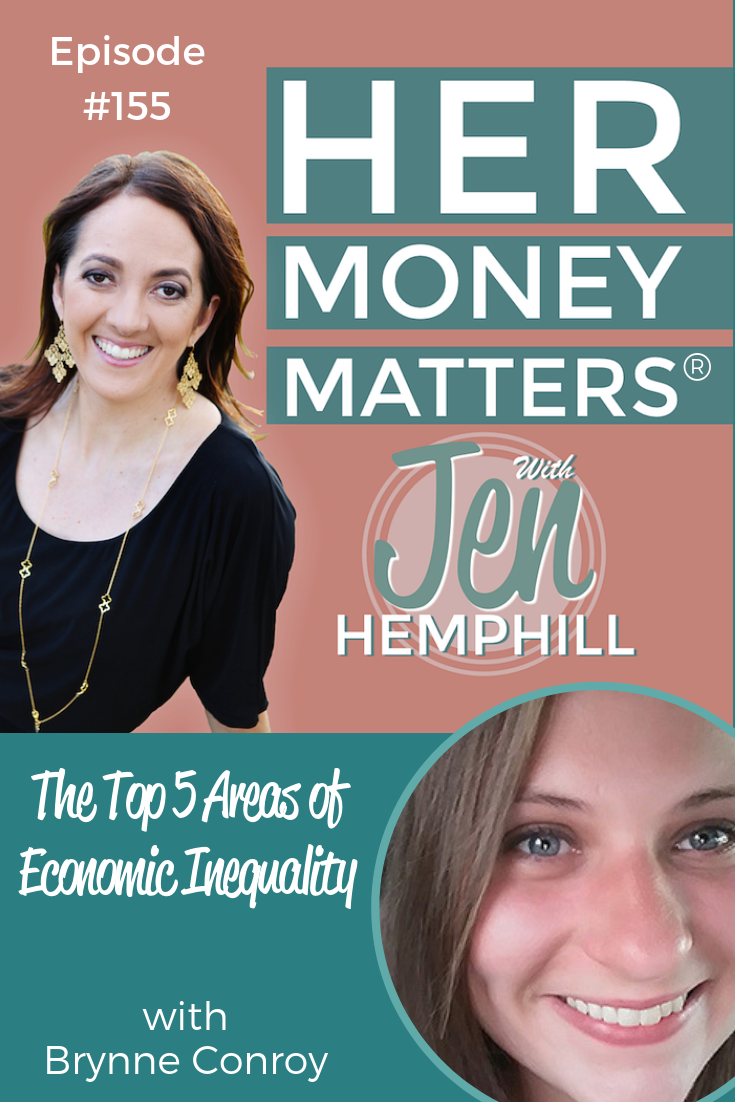 Jen Hemphill, a military spouse & proud bilingual Latina, helps the busy career-oriented woman become the reina (queen) of her money and love her dinero more. She is a Money Confidence Mentor, an AFC® (Accredited Financial Counselor), author, speaker and hosts the Her Dinero Matters podcast.
View all posts by Jen Hemphill →