By Jen Hemphill on November 5, 2020 in HDM Podcast, Podcast 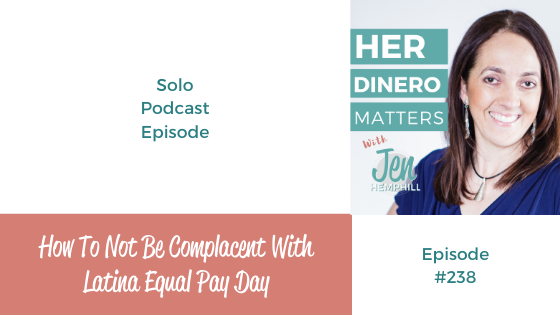 Every year, Latina Equal Pay Day falls on a different day and in some years we seem to have achieved more progress than in others, but what really determines that progress? Have you ever stopped to remember when you started hearing about Latina Equal Pay Day and the overall gender wage gap?

In this solo episode, I walk down history lane regarding Latina Equal Pay Day and I share with you the research I found about the different pieces of legislation surrounding the gender wage gap. I want to inspire you and at the same time remind myself that we need to keep asking questions and not be complacent with this very important issue that affects all of us mujeres, but especially as Latinas.

In order to fully understand if there has been any progress in closing the gender wage gap, we need to have data that tracks that progress, and an explanation of how that data was collected. I was curious as to how long we have actually been observing Latina Equal Pay Day because, for me, it feels like I have really only heard about it for the last 3 years, and I found some information about it being observed back in 2014 but nothing prior to that.

I couldn’t find any explanations as to why the date keeps changing each year, and this raises the question, what has improved, and how did the “powers” arrive at this conclusion? I wanted to see data backing it up but was not able to find any, so if you know of any data supporting these date changes or the “progress” that has occurred, please share it with me!

We also need to know where we come from and where we have been to know where we are going, and that is why I am providing you with this quick stroll down history lane in reference to Latina Equal Pay Day, let’s get started!

A Trip Down History Lane Relating to the Wage Gap

Here is a quick summary of the different legislations that have been passed from 1938 to now, and also the one that has been proposed countless times and to this day, still has not been passed.

Establishes wage and time requirements when minors can work, and it sets the minimum wage that must be paid and mandates when overtime must be paid.

Created to make it illegal for employers to pay unequal wages to men and women for the same type of work. A prime example of legislation that is passed but not enforced!

Proposed to add protections to the Equal Pay Act and the Fair Labors Act as an effort to close the gender gap in the United States. It has been proposed 12 times and still has not been passed into law!

The Future Projections for the Wage Gap

According to the Institute of Women’s Policy Research, it will take until 2059 to close the wage gap for all women compared to White men and it is even worse when we look at the different subgroups!

What Can We be Doing to Close the Wage Gap?

These projections are scary; to think that we have such a long way to go to achieve gender wage equality, and this is why we can’t be complacent with Latina Equal Pay Day!

Some of my questions are:

We need to be asking questions and do our own research, learn as much as we can about what can be done and what is being done in other countries to close this wage gap. It is important that we don’t become complacent but instead, we are active in the decisions that are being made, not just in the federal government but also at the state and local levels. Let’s research what our leaders are proposing, and find which representatives are fighting for this equality so that we can support them!

If you want to listen to my previous episodes about Latina Equal Pay Day these are the links:
Additional resources used in this episode:

Enrollment is now open for the Her Dinero Power Circle. Get a special discount for a limited time using the code FANSONLY. Get all the details here: jenhemphill.com/powercircle

This Episode is Sponsored by First Republic Bank

I want to hear from you!  What was your favorite takeaway from this episode? Come on over to @HerDineroMatters on Instagram and share it with us there.

Be sure to never miss an episode by hitting the subscribe or follow button on your favorite podcast app! Get instant notifications of the latest episodes now!

Be sure to share with a friend (or two)! You never know what someone is going through in their financial life. Here is a tweet you can share now:

Reinas wanted! Join me in becoming the reina of your money on the Her Dinero Matters podcast: herdineromatters.com
Tweet This

The post, How To Not Be Complacent With Latina Equal Pay Day | HDM 238 appeared first on the Her Dinero Matters Podcast. 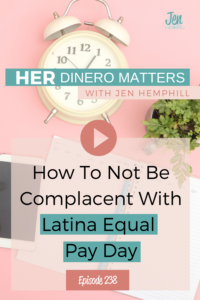