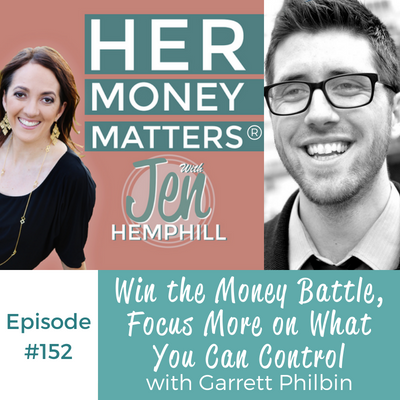 Do you find yourself confident in most areas of your life, but when it comes to money you run to a corner a hide? You aren’t alone in this!

This week’s guest Garrett Philbin provides some insanely good insights on how you can win the money battle.

Garrett’s parents would commonly balance their checkbooks at the dinner table, which inspired open conversations about money. Garrett learnt much about mortgages and bank accounts. Right from the beginning, Garrett was given tools on how to spend money wisely, starting with a budget at the age of ten.

In college, Garrett studied music business as a major. After he graduated, Garrett volunteered full time for two years as a mentor to students with troubled backgrounds. Later, his path brought him to New York to work in the music business. Garrett quickly learnt he did not enjoy the industry, and decided to open his own music production company with some friends from college. Even with his own company, Garrett was still unhappy, and it wasn’t until a conversation five years later that Garrett’s life changed. While discussing his troubles, one of the co-founders of his music company mentioned financial counselling as a possible career for Garrett. With his mind swimming with the possibilities as a financial counsellor, Garrett went home and wrote pages of ways he could help others with their money. That was the moment Garrett realized that, for the first time in his adult life, he had passion for something.

During his career as a financial counsellor, Garrett has noticed similar patterns concerning women. He states that more often than not, women have a common belief that they aren’t good enough, or should not be good enough, to do well with money. Most of the issues faced by his clients are results of other non-money related issues. In order to help these women overcome their lack of confidence, Garrett takes them through their own money stories, and gives them exercises to work on. These exercises are often picked based on his clients’ personality and situation.

– Imagine if you were financially secure. How would that feel, and how would you live your life?

– Now imagine you are given 10-12 years to live. You won’t get sick, but you don’t know when you will die. How would you live your life then?

– The doctor tells you you have 24hrs to live. What are your first thoughts? Who did you wish you’d become?

Garrett’s View on the Wage Gap

One of the most notable statistics regarding the wage gap is that women of colour make 50-60¢ to the dollar of white men. The money gap is real. Money is power, so it has been seen as a bad thing, since people in power haven’t used it in the best ways. Garrett states that a good place to start towards the goal of pay equality is feeling more in control of yourself. If you take care and work on the money part (what you have control over), then you can help others. You become a better advocate when you have more financial confidence.

Financial confidence leads to self confidence, which leads to power. In the workplace, confident, outspoken women are seen as bossy. There are so many roadblocks for women (especially concerning how they should and should not act) in order to bridge the wage gap. We need to acknowledge that is how it is. People in power need to make the decision to not put the pressure on the ones doing the work.

Be Awesome Not Broke (Garrett’s site)

Garrett’s podcast he co-hosts: Beyond the Dollar

My guest appearance on Beyond the Dollar

The post, HMM 152: Win the Money Battle, Focus More on What You Can Control with Garrett Philbin appeared first on the Her Money Matters Podcast.

Jen Hemphill, a military spouse & proud bilingual Latina, helps the busy career-oriented woman become the reina (queen) of her money and love her dinero more. She is a Money Confidence Mentor, an AFC® (Accredited Financial Counselor), author, speaker and hosts the Her Dinero Matters podcast.
View all posts by Jen Hemphill →

HMM 151: How to Have the Money Talk with Your Aging Parents
HMM 153: The Dine and Dash and More Funny Money Stories with Joe Saul-Sehy