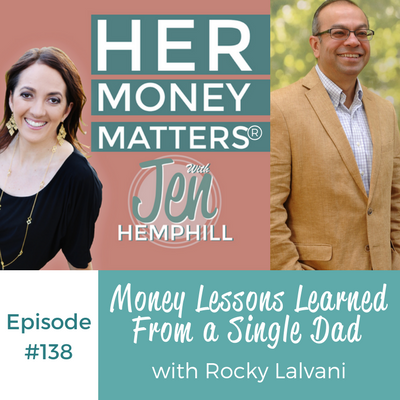 This week’s guest was raised by a single dad and brings a beautiful perspective on money. Rocky Lalvani’s focus is on living a richer life, but not in the sense on focusing on becoming rich with money but rather living your life on your own terms, whatever that may mean and look like for you.
Listen to the Episode Below
0.75x
1x
1.25x
1.5x
2x
0:00
...
Himalaya Apple PodcastsStitcherSpotifyLeave a ReviewShare DownloadGoogle PodcastsListen in a New WindowSoundCloudSubscribe on Androidhttp://jenhemphill.libsyn.com/rssPlayer Embed
Powered by the Simple Podcast Press Player

Rocky Lalvani moved to the US from India with his family at the age of two. At the time, his father was only able to bring $25 from India to start their new life. Despite starting from the bottom, Rocky’s Dad went back to college at 42, and quickly gained wealth. Individuals from Rocky’s Indian hometown openly spoke about money. With the expectation for success, people were constantly moving up the economic ladder. Since he was surrounded by his family and family friends, Rocky grew up with a strong knowledge of money management, as it was part of his native culture. So long as you show up and do the hard work, Rocky believes the ‘American Dream’ is very possible.

Rocky’s parents always saved money, even when they weren’t making much. They would walk instead of taking the bus, just to save that extra quarter. They would buy nice things at cheap prices. They had a great sense negotiation and a knowledge for good deals; that is where they found quality. They never had debt, as it was a huge ‘no-no’ in their culture.

At 7 years old, Rocky’s mother passed away due to breast cancer. This made things more difficult for his father to move up the economic ladder. Despite the hardship, his father remained content with whatever money he had. Rocky’s father shared the importance of frugality, knowing how to make your money go far, and being content.

How Rocky overcame his barrier to contentment

From a young age, Rocky was surrounded by very wealth individuals individuals. Because of this, he grew to focus primarily on becoming a millionaire. For years he strictly chased the money, until he realized what was lacking in his life. Rocky realized there is no happiness in chasing money. Money can make you comfortable by covering your basic needs, but it is the other things in life that create happiness.

As a general rule, Rocky observed that wealthy parents spoiled their kids. The parents would pay for their every need, and the children would end up with no knowledge on how to get a job or sustain themselves; their kids became burdens. Knowing he did not want his kids to be like this, Rocky implemented an allowance system when his kids reached 4 to 5 years old. The rules were:

The savings portion was meant for goals beyond college. With an allowance, Rocky and his wife would not buy things for their kids. Their kids therefore learned how to use money, and how to delegate their spending.

In terms of purchasing items, Rocky would discuss comparison shopping and making choices with his children. His son collected Pokémon cards. Almost every time they went to target, his son would want to purchase the 10 card pack for $10. However, Rocky would point out a box with 35 cards for $25, and a pack of 150 cards for $25 on eBay. By doing this, he would have constant conversations about choices and comparing prices between stores. This taught his kids to save up for larger purchases, to say no to some things, and to pick the better deals. Rocky believed that if his kids were smart enough to go to college, then they were smart enough to pay their way through it. This taught his kids the time value of money, multiple ways to get money, and that the best way to get money for college was to be a good student. He allowed his children to make their own choices, and to learn lessons through their failures.

Rocky’s last tip is that parents ‘walk the talk’, as kids can detect hypocrisy; what you say does not matter, but what you do does. Little actions such as, “don’t tell mom”, “don’t tell dad”, will teach kids bad behaviours.

As kids get older, their needs increase, therefore Rocky believes their allowance should increase over time too. Regarding allowance versus earning money, Rocky says that if a child does not have money, they cannot learn how to use it. This is why Rocky chose the allowance route. His kids could do chores to get more money if they wished, but Rocky states that taking away money as a punishment for not completing chores creates a battle with money for your kids. A child’s money script is designed between 5-12 years old, so Rocky suggests they are started young, and as many barriers are removed as possible.

Rocky’s podcast, The Richer Soul, delves into life beyond money, after the finances are in order, and focusing on the rest life. Some topics include:

Rocky was inspired to create the podcast after he met with several money planners. The money planners would strictly focus on the money they were managing, ignoring another opportunities. On his podcast, Rocky focuses on building financial bases to create freedom, in order to create the life of freedom you desire.

Rocky’s website: richersoul.com
Click here for my interview on the Richer Soul Podcast
Want to provide feedback for the podcast? You can do so here: www.jenhemphill.com/shareyourvoice

The post, HMM 138: Money Lessons Learned From a Single Dad With Rocky Lalvani appeared first on the Her Money Matters Podcast.

HMM 137: How Your Net Worth Narrates the Story of Your Life With Natali Morris
HMM 139: From Sleepwalking in Her Financial Life to Being Intentional With Jamila Souffrant