By Jen Hemphill on December 7, 2017 in HMM Podcast, Podcast 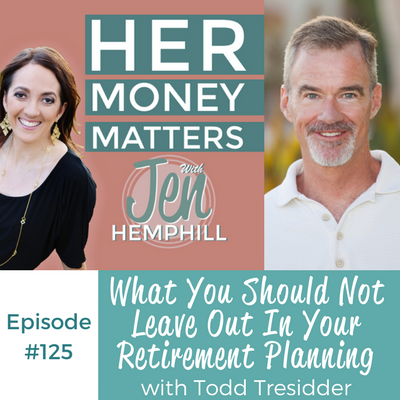 “Make everything as simple as possible but no simpler”—Albert Einstein

The Financial Mentor, Todd Tresidder implements this philosophy when educating his clients on retirement planning.

In this episode, you will learn…

Todd had a solid middle-class upbringing.  Money was never a big issue for him – there wasn’t enough money in his viewpoint, but they always had what was necessary.  He does recall really struggling through college. At one point he had only $100 to last through an entire quarter (made it work). Todd went to UCLA, the bicycle capital of the world, and he couldn’t afford a bicycle.

He made several observations of others graduating:

He engineered his life to creating financial freedom, and it took him 12 years.  He started off by going to the library to read up on how to build wealth and investments, and biographies of wealthy people.  He concluded that if you wanted to become financially independent, you had to become an expert.

When he graduated from college, with an economics degree, he was interviewing with investment firms out of LA.  He had a great resume, and the jobs were good and high paying, but them as becoming part of the cubicle nation, something that wasn’t appealing to him at all.

Instead, he took a position in sales with a start-up hedge fund with one other guy.  He was taking a draw from the sales that he made as a salary, and felt that he was working for experience, not for the money.

Todd spent 12 years doing research on wealth management systems, risk systems, market timing systems and tested most of what was out there.  This was in the early days of computers when there were no databases to model investment systems with – Todd had to create his own.  He was modeling computerized trading systems and risk management systems.  And during this time, his knowledge skyrocketed – he was in fact, getting paid to learn.  Eventually, he developed stuff that worked, became a partner, and attained a mid-six-figure income within 6 years.

It is the combination of the three models that give you a really strong understanding of the various dimensions of retirement planning, that you can manipulate and work with to achieve your retirement goals.

Todd has a calculator on his website that is private, that helps people work out scenarios based on assumptions.  While it is very popular, he cautions that retirement calculations are as good as the assumptions that are made, and assumptions are hard to make.  Even being 1% off can change everything drastically.

Make more money than you spend and invest the difference wisely

Her Money Matters Because:

RESOURCES AND LINKS TO MENTION:

Learn more about Todd at FinancialMentor.com

f you are ready to dive into 1:1 coaching use this link: jenhemphill.com/application

**Please note I love to give shout-outs to my listeners, so if you’d rather me not mention your email message or play your voicemail on the show be sure to clearly state that, thank you!*